Banzai Records was a canadian record label active in the '80s. They were mainly licensing heavy metal albums that weren't domestically available in Canada. So most of what was on Metal Blade / Megaforce Records, Neat Records, Noise Records, Roadrunner, etc, would be released in Canada thru Banzai Records, via Polygram distribution. Michel Meese, founder and president of Banzai Records, had an immense knowledge of the metal scene, and a great feel for the canadian market. By seeing which imported albums were good sellers, the ones he chose to release on Banzai were always well recieved.

Although the label had the rights to distribute most of the albums, a few are believed to be bootlegs. First pressed at 1000 copies, re-prints were ordered depending on popularity. Very few ever made it past 10,000 copies. But many of them were sold as cassettes, since it was the medium of choice back then, in the golden age of walkmans! A notable exception is Metallica. Both of thier Banzai releases reached gold status in Canada, at 50,000 copies each. A feat also accomplished by Venom's Canadian Assault.

The particularity of the Banzai releases was that the artwork of the albums was identical to the worldwide copies, but the labels on the vinyl were Banzai standardized! The typical Banzai "A" side's label had the whole album's tracklist written on it. And the sides were identified as being "This Side" for the A side, and "That Side" for the B side. The B side, or That Side's label was always the same Banzai Records samurai fight over a sunrise image. That logo was designed by Paul Bellemare of Les Frères à Ch'val and '70s punk band Danger. He was a friend of Mr. Meese and an avid fan of japanese culture. The A side, or This Side's label was either white or black, with red lettering. The first pressings of lps up to at least BRC 1912 had the white label. The rest had the black label, including later pressings of the first releases. It is believed that some second pressings (black labels) are more rare than the first pressings (white labels). Some ep releases have a red label with black lettering. The only other distinction was the addition of a speed metal swirl logo on the front sleeve of the more aggressive releases, like albums by Hellhammer, Celtic Frost, and Possessed. It was a marketing idea to target a specific audience. It still has an impact today since those versions are sought after by many collectors. The design was from Polygram's in-house graphic designer Gunther Woschank. He also had the task of modifying album artwork for the canadian market, by adding Banzai's address and Polygram info, sometimes using an alternate front cover, and in a few occasions, censoring offensive covers!

Typical B side (That Side) label

Various A side labels 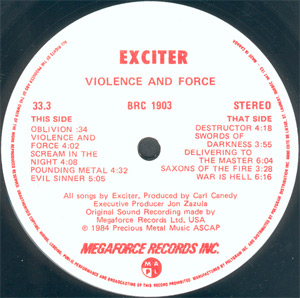 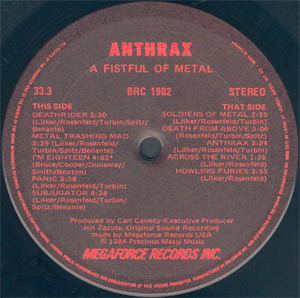 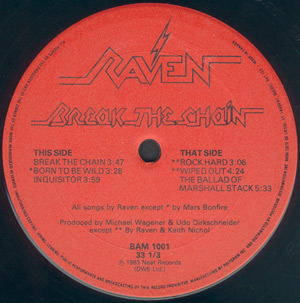 On Slayer's Hell Awaits inner sleeve photo montage, there is one shot of Michel Meese, the owner of Rock en Stock and Banzai Records. 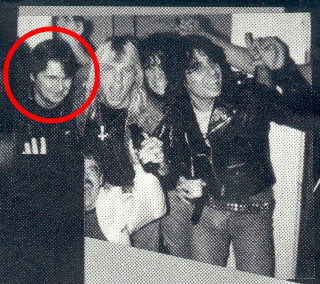 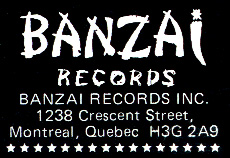 There are different record labels named Banzai. One that comes up often specializes in live bootleg cds from various rock artists, and is based in Italy. It is not associated with this Banzai label.